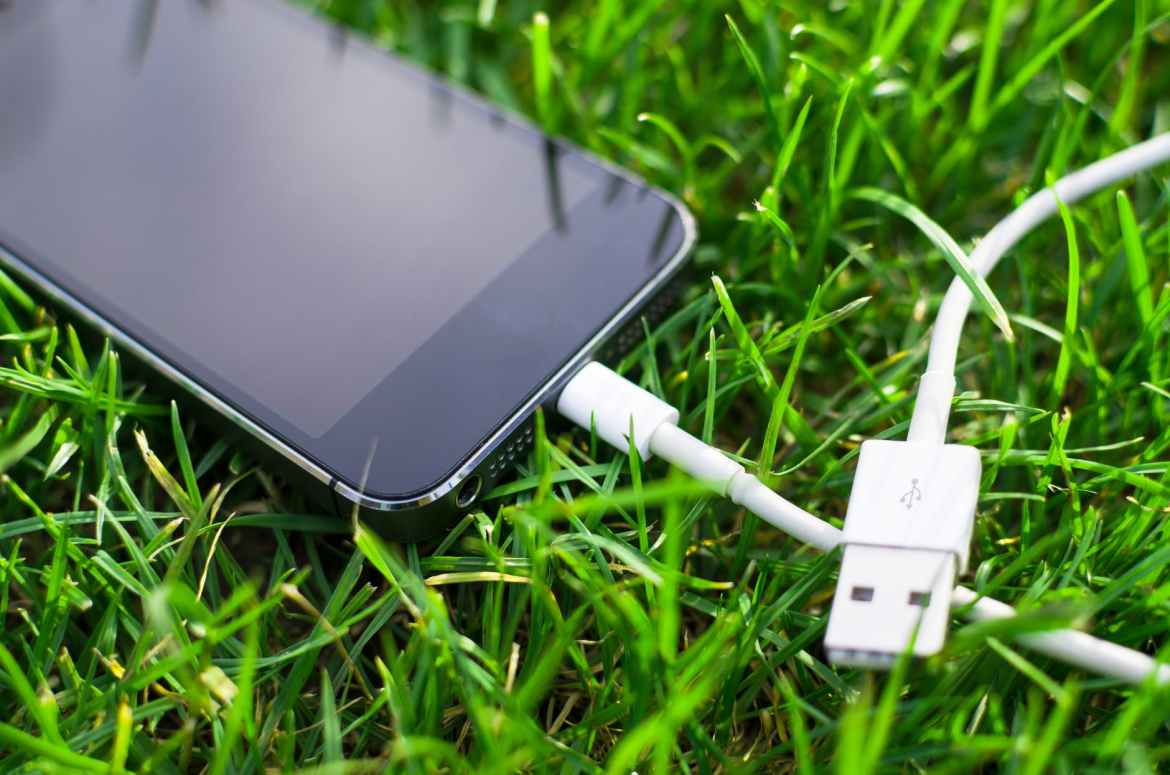 Long gone are the days when Glastonbury would be awash with rumours that the Queen had died. Now that everyone has a smartphone, many festivals now benefit from enhanced 4G internet coverage, leaving power the one remaining hurdle to staying connected throughout the weekend. We look at some of the best portable chargers around that’ll keep you going until you get back home.

Some festivals have traders offering phone charging, but it’s usually expensive. Some will charge well over a fiver for only an hour of charging.

That’s why power banks, or portable chargers, offer a much better alternative. A high-capacity power bank can keep a modern smartphone going throughout even a 5-day festival. Often for less than the price of a phone charging pass at a festival, you can get a decent power bank that you can use again and again for years to come.

These devices contain batteries way bigger than inside your phone, and once charged, provide USB ports for keeping your phone and other devices going when you’re away from mains power. Portable chargers are perfect for days out, camping, and of course, music festivals.

We’ve listed a few tried and tested power banks below, with most available online and a couple from the high street that you can pick up today.

Best portable charger: So which power banks will last all weekend?

A power bank’s battery capacity is measured in mAh, just like your phone. The smallest power banks are around 2,000mAh, and with most modern smartphones batteries around 2,000 – 3,000mah themselves, these tiny chargers are only good for a quick top-up charge. Their tiny size can make them useful, and can often be carried in a pocket, but they’re no use for a music festival with 3 to 6 days away from a plug socket.

Even the best portable charger doesn’t operate totally efficiently, though a good one should only lose 10% – 20% of its stated capacity when charging your phone. For this reason, we recommend a portable charger with a capacity over 20,000mAh for music festivals and camping trips.

Whilst they can be expensive on the high street, safety certified high-quality power banks with a 20,000mAh capacity can now be purchased online for less than the price of a weekend charging wristband at a festival.

For a festival, a 20,000mAh or larger capacity is perfect. It should ensure your smartphone lasts the entire event, even if you use it heavily and require more than one recharge per day. Most will have multiple USB sockets, allowing you to keep a friend’s device topped-up too!

The best power banks: 7 portable chargers that will last an entire festival

Anker are the big name in portable chargers, known for their exceptionally high-quality products. They also have an awesome 18 month warranty.

The Anker power bank we recommend comes in two versions, one of them with QuickCharge 3.0 compatibility for Android devices.

The Anker PowerCore 20100 is the version without QuickCharge, so if you’ll only be charging iPhones, you won’t see any benefit from upgrading to the ‘Speed’ version. It’s got a 20100mAh capacity, plenty for a full festival, and charges via microUSB, with a charging cable included.

It takes about 10 hours to fully recharge and has ‘PowerIQ’ and ‘VoltageBoost’ technology to ensure your iPhone is always charging at the fastest possible speed. It’s available in black, blue, and white colours.

The Anker PowerCore Speed 20000 boasts Quick Charge 3.0 at up to 24W. It’s backwards compatible with earlier versions of Quick Charge and should charge most modern Android phones at lightning speed.

Other than that, it’s pretty much the same as the PowerCore 20100, albiet with a 0.5% lower capacity.

EC Technology’s distinctive black and red power bank has become very popular over the years, and you’ve probably seen someone else using one. They invaded every festival field by matching the features and quality of the best on the market, whilst also offering the best value around.

Their new power bank for this year offers the same brilliant value, offering a massive 26,800mAh capacity and dual USB-C and microUSB inputs, so you can recharge it with either cable.

The two USB outputs support a high power 2.4A each, so Android Quick Charge aside, it’ll always charge your phone at the fastest possible speed. It’ll still be pretty quick on Android too. It takes about 11 hours to fully recharge the power bank.

We used this one ourselves at Shindig Weekender this summer, and it kept two phones going until we got back in the car Monday morning.

Aukey’s reputation has solidified in recent years, partly thanks to their awesome 24 month warranty. This is a great value, high quality power bank with a 20,000mAh capacity, enough to last throughout a festival.

Like the EC Technology charger above, it has dual inputs, but this time it’s a Apple Lightning and microUSB ports..

This means iPhone users can recharge both their phone and the power bank with the same cable. This is a unique feature we haven’t really seen on anything else. And no, you can’t charge it faster by plugging both in at once. Sorry.

Like the Anker PowerCore models above there are two different versions, one with and one without support for Android’s Quick Charge feature.

This one’s available today on the high street!

If you don’t fancy buying online, or you need something you can pick up right now, this power bank is available on the high street. There’s also an Argos pick further down if Currys isn’t your thing.

Its 20000mAh capacity means it’s a great portable charger for festivals. It recharges over microUSB and has two standard USB ports for recharging your devices

It’s currently £34.99 in Currys, and if you need it today, you can enter your postcode to check stock in nearby stores and collect in minutes.

Check stock in your local Argos and pick up today

If you prefer Argos to Currys and need to buy on the high street, this is another viable option.

You do get a pretty decent power bank for the premium price, with a screen, two normal USB outputs and a USB-C port too. You can use the USB-C for recharging both your phone and the power bank itself or recharge the power bank via a microUSB socket. It also supports both Quick Charge 3.0 and USB Power Delivery for super-quick recharging.

What is Quick Charge?

The iPhone 8 and above and most modern Android phones support fast charging, either via ‘USB Power Delivery’ or ‘Quick Charge 3.0+’. This means if you also purchase a portable charger that supports these technologies, it’ll top-up your phone battery at super-fast speed. Perfect if you want to recharge at your tent for half an hour before heading back into the festival with a fully charged phone.

iPhones need a power bank with ‘USB Power Delivery’ to fast charge, as do some Android phones like the Google Pixel. Other Android phones need ‘Quick Charge’, but some of our best picks support both anyway.

And of course, if your phone isn’t compatible, it will still charge as normal at standard USB speeds from a Quick Charge charger.

Does my phone have Quick Charge?

If it’s an iPhone, it needs to be the iPhone 8 or newer. These should recharge to 50% from empty in 30 minutes with a USB Power Delivery charger, according to Apple.

For all other phones, try Googling the model number of your phone followed by ‘quick charge’ and you should find out pretty quick. There’s an official device list here, but it hasn’t been updated for nearly a year.

I’ve seen chargers on eBay with much higher capacities, how come?

Portable chargers, or power banks, sold on eBay unfortunately often have fake capacity listings. It’s difficult for a consumer to test the capacity of a power bank themselves, and most don’t understand the capacity ratings anyhow. eBay sellers take advantage of this and pretend their power banks have a much higher capacity than in reality.

It’s very hard to create higher density batteries, so if you see a power bank offering 40,000mAh capacity in a similar size and weight to the 20,000mAh ones listed here, you know it’s a fake capacity.

Worse still, most of these fakes also aren’t safety tested. As power banks are made of volatile lithium batteries, we recommend sticking to the official Amazon stores of the trusted brands listed above, or even the high street. Never buy untested lithium battery products from unknown eBay sellers.

Why are portable chargers so expensive on the high street?

Some high street stores take advantage of poor customer knowledge, as few are aware of what the different capacities mean, and how they relate to their devices. They often charge as much for a 5,000mAh charger as a higher quality, 20,000mAh charger would cost online.

How do you recharge a portable charger?

It’s usually really simple to figure out how to recharge a portable charger or power bank. Just look for a small socket, usually labelled input. It’s usually a microUSB socket, but whatever it is, it’ll match the short cable included with your power bank. Most of these high capacity power banks will take 10-12 hours to fully charge, and all have LED lights which will indicate when the power bank’s batteries are full.

The Aukey power bank also has a Lightning charging socket, allowing it to be recharged using the same cable as an iPhone or iPad. The Anker Powercore 26800 and EC Technology power banks support dual-microUSB recharging, using two charging cables to cut the charging time to under 6 hours.

What’s the difference between power banks and portable chargers?

Nothing. We’ve used the terms interchangeably here. Sorry. Some people also call them battery packs or power packs. They all mean the same thing. Simply a battery with some USB sockets that can be used to recharge other devices’ batteries.

How many times can a power bank be recharged?

A portable charger, or power bank, uses the same type of Lithium battery as your phone. They can be recharged thousands of times whilst remaining effective, though after several years, there may be some reduction in total capacity.

Can temperature affect a power bank?

Yes. Lithium batteries work best between 10°C and 50°C, and should never be recharged when below 0°C, as this can damage the battery. Using a power bank at a low temperature shouldn’t have any permanent effects, but may reduce the effective charge of the power bank.

During the British summer, I’d expect the temperature in your tent to stay within the ideal range. Just watch out for leaving your power bank lying around in direct, strong sunlight and you’ll be fine. And remember, your phone uses the same Lithium battery technology, so avoid charging it if it’s ever below freezing.

It’s normal for both power banks and smartphones to become warm or generate heat during use. However, if your device gets too hot, safety mechanisms should cause it to cut off. This can happen if you leave your smartphone or power bank in direct sunlight, or during a malfunction.

Reviewed: Some of the best festival tents for 2020

Festival Hacks That Will Make Your Life Easier...

Some of the best festival wellies for 2020

Reviewed: Some of the best festival tents for...

Music festivals coming up across Chester and North...

How to make the journey to your next...

Easy ways to repair your tent instead of...