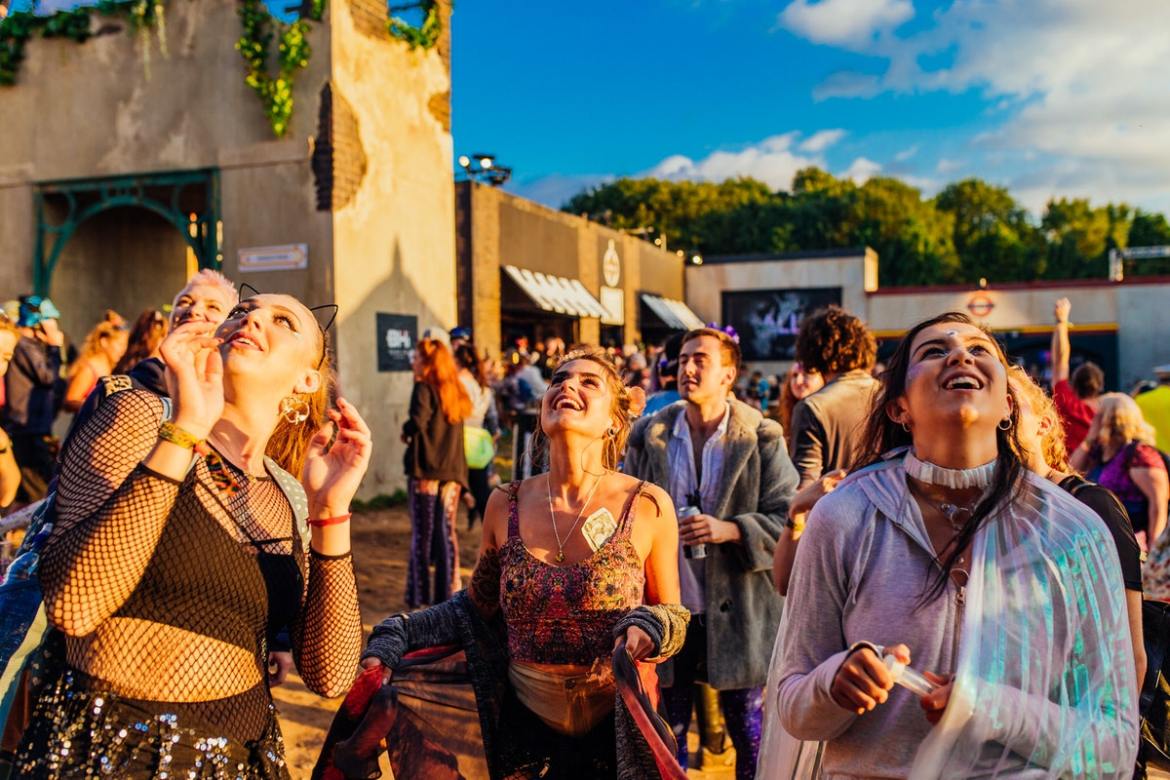 Turns out, despite its status as a festival fashion stalwart, glitter is actually really bad for the environment.

Plastic pollution has become a burning issue in recent months. Like those plastic microbeads that have been banned from your shower gel, glitter is a microplastic. Worse, it’s often coated with metal.

Like microbeads, glitter tends to end up in our rivers and oceans, usually following showering or washing clothes.

It doesn’t biodegrade either, so can pollute the soil of a festival site for decades, or until it gets eaten by wildlife or livestock, which again is far from ideal.

Festivals love to cite their eco-credentials, so this year, expect to see plastic glitter prohibited from many festivals across the country. Several festivals have already explicitly banned glitter, some going back as early as 2016.

Joining them are the 61 festivals that make up the Association of Independent Festivals, or AIF. The association confirmed this week that all of its members have signed a pledge to ban glitter from their events.

Thankfully, a ‘ ‘ alternative is being pushed, made from wood fibres. Festivals including Shambala that prohibited traditional glitter this year have encouraged their traders to stock this eco-friendly alternative.

This stuff is just like regular chunky glitter, and whilst makeup companies will happily sell it for like £8 a tub, you can get a re-fillable bag on eBay for under £3.

The #DrasticOnPlastic pledge signed by 61 independent festivals, including Shambala and Boomtown, requires festivals to become totally free of single-use plastics by 2021. This not only includes traditional glitter, but plastic cups,  straws, food trays, wet wipes, and even cable ties used in building the festival site!

Catch our full list of festivals banning glitter below.

Bestival is one of festivals that have signed the ‘Drastic on Plastic’ pledge to ban all single-use plastic. Organiser Rob Da Bank told press:

“Unless you’ve been living on the moon, you’ll know the plastic problem is not going away. I’m very proud that the organisation we started with five members 10 years ago now boasts over 60 who have all signed up to plastic in the next couple of years. This is exactly the sort of work the AIF [Association of Independent Festivals] needs to be doing – leading the global charge against essentially unnecessary plastic at all our festivals.”

Bestival takes place at Dorset’s Lulworth Estate during the first weekend of August.

Unsurprisingly, Green Gathering have been somewhat leading the way on this. Not only has plastic glitter been banned since 2016, Green Gathering are so green that they’re advising against biodegradable glitter this year!

They’re not keen on so-called BioGlitter until further research has confirmed the impact of biodegradable glitter on fields and watercourses, and until ethical sourcing has been proven.

Reliant on local produce and solar power, Green Gathering has perhaps the most comprehensive sustainability policy of any British festival.

Shambala confirmed in a blog post last week that traditional glitter would be banned from this year’s event. It will not be available anywhere on site.

Ticket holders will not be stopped from bringing glitter into the event, but traders will only be permitted to use glitter.

In fact, Shambala recommend not using glitter at all, if it can be avoided, recommending its traders embrace face paints, paper, and masks instead.

Pangaea isn’t your typical festival, rather it’s an annual one-day event hosted by the University of Manchester Students Union.

Regardless, they’re members of the Association of Independent Festivals, and as such, have signed the Drastic on pledge and therefore will be banning all single-use plastic, including glitter, from Pangea.

Tickets for this summer’s Pangaea are currently just £20.

Another favourite for glitter and another independent festival pledged to remove all single-use plastic from , including drinks bottles, plastic straws, and of course, glitter!

This year’s Boomtown sold out in record time, way back in February. Probably something to do with the fact it’s being headlined by Gorillaz and Limp Bizkit, I reckon?

If you really don’t wanna miss out, this year Boomtown holding a ticket resale in June.

Welsh festival Green Man, held in the stunning Brecon Beacons, in an independent festival renowned for their non-corporate, ethical approach.

They’re not members of the but have taken their own steps to cut back on the use of non-essential plastics.

WeAreFSTVL hasn’t made any official announcement to the press about banning glitter, or plastic, on a wider basis. However, the Evening Standard reported that they have banned traders from selling traditional glitter on site this year. It’ll be that stuff only.

WeAreFSTVL takes place early in the festival calendar, towards the end of May in Outer London. This year’s event features massive acts such as Eric Prydz, Andy C, Gorgon City and Seth Troxler.

Tickets for WeAreFSTVL are in their ‘final release’ and reportedly about to sell out. VIP tickets are available for a mere £30 additional fee, and the festival have taken the curious step of allowing beer tokens to be purchased in blocks of £50 online.

Lake District favourite Kendal Calling is another independent festival that has signed the Drastic on pledge, meaning plastic straws will be banned from the site this summer. This will be followed by all single-use plastic including glitter within three years.

This year’s Kendal Calling features a headline set from The Libertines, alongside Run DMC and Catfish & The Bottlemen.

Jake Bugg and Clean Bandit are set to headline the second stage, and this year Tramlines have added a brand new comedy stage to supplement it’s four music stages. Under 15 minutes from Sheffield City Centre by tram, the Tramlines party continues into the early hours of the morning at an array of city centre venues.

Tramlines are a member of the Association of Independent Festivals, and as such, are one of 61 festivals pledged to abolish all single-use plastic, including glitter, within three years.

Festival director Sarah Nulty told TheFestivals.UK: “The festival industry has been doing loads in the way of sustainability and I think Tramlines needs to make sure it is too. We want to start the process this year with removing plastic, but need to work with our traders etc to make sure it’s across the site. we can get there before 2021, but there is a UK wide campaign for festivals to try and hit that target which we are part of.”

Hailed by the BBC as the UK’s most magical festival, a fairy from 3 Wishes Fairy Fest reached out to . to tell us “as fairies, glitter is a part of fairyland, but we realise we needed to adapt too for the sake of our planet.”

As such, 3 Wishes Fairy Festival operates the following glitter policy:
All stalls that sell glitter, must be certified eco glitter. We encourage all our visitors to only use eco glitter. Fairies are the guardians of nature, so as the founder of 3 Wishes Fairy Festival it is our duty to do the same in human land! We also encourage people to take away their recycling, and our caterers only use biodegradable cups and plates etc.

Over 60 festivals have signed the Association of Independent Festivals’ pledge to get #DrasticOnPlastic and ban all single-use plastics, including glitter, from their events by 2021. The full list of AIF members taking part is below:

These festivals all sell weekend tickets for under £100

Pictures of Gwen: The new immersive adventure from...

Glastonbury’s Land Rovers are getting a full electric...

Boomtown resets to Chapter One with an all-new...